I was approached by a fine young RA from who wanted a design for the on campus house she resided. It was an all girl house so she wanted something nice and on a purple hoody. OK that was something to start with. After a bit of conversation we determined a one color design on the front and down the sleeve. The front would be a sketch of the house with the name incorporated into the design and the sleeve would be sketchy figures representing each of the residents. 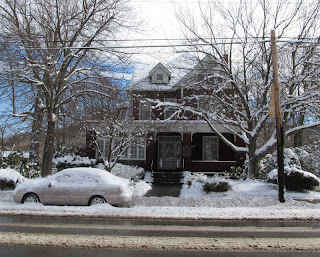 I was given a quick photo of the house to work from. Hmmmm OK this would be interesting. ’s of white trim, windows and doorway. The drawing would need to be dark so the print would be light on the shirt. It’s important to remember this as you do a “reverse” design for printing on a dark background.
I did a quick sketch and in trying to determine the type treatment I chose to use a plaque from the front column. I thought it would be a nice way to have them remember their time there. The sleeve was another subject. The RA had mentioned “stick figures” so I tried my hand at something I hadn’t done since I was three or so. After a bit of stylizing the figures I proposed these designs: 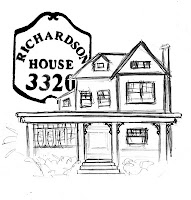 The house was a success as it was just the beginning I would be refining it. The plaque was nice but not what they had in mind. The stick figures were a big thumbs down.

After their input, I literally went back to the drawing board. One of the residents did some calligraphy so we had her write “Richardson House” several ways and I continued the house sketch. We chose this version of the type. 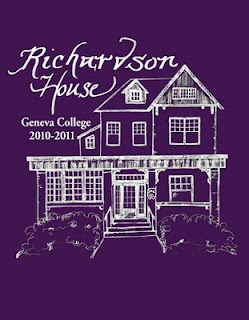 Once the house was finished but not to refined to maintain the sketchiness I broke the type into two lines and placed it where the plaque was, tucking it in by the rooftop. They were ecstatic with the final results.
The sleeve went through some iterations and finally just sat down with their RA to do the figures one by one. After hashing out the first three or so we hit on a design she liked and the rest turned out like so.

I haven’t seen the printed shirt yet but will post an image once I get it.
Posted by Rando at 12:50 PM No comments: