If you have a rough game of Warhammer where the opposing force has a castle, a siege tower is a necessity. After Joshua and I had started our own castle it was apparent we’d need some good siege equipment to lead the attack. We thought a good battering ram, a catapult or trebuchet and lastly, a couple siege towers.

Cardboard was plentiful that Saturday afternoon, so the siege tower began. We took several measurement, wall height, archer height and base width etc. The tower would need to be tall enough to drop invaders off on the wall and provide cover fire for a successful storming of the castle!

We cut the sides at an angle to provide a wider base and once the outer wall was cut we cut 4 floor pieces. One for the base, one for the men attacking once the door dropped, one for the first level of cover archers and then the top for another rank of supporting archers. We cut out the door and one window for the arrow slits. Remember to measure twice or even thrice and then cut. Once the floors were glued in, Elmers or craft glue will work, we could start the covering. Always check your measurements before the glue dries.

We cut three successive levels of popsicle sticks to size with a hobby knife and cut chunks out of the sides to give it a less uniform appearance. We glued tall sticks over the one window to form the arrow slits in the middle of the tower.

Cutting the angled sticks can be difficult, be careful not to split the sticks, but if you do hang onto them for now. Use several light successive cuts to score the stick and eventually you’ll get through it. Remember knives can cut through a finger pretty cleanly. Have a friend that knows first aid over just in case.

On to mobility. We planned three large wooden wheels shod in iron bands for each side. We had picked up some wooden disks in a bargain bin so decided they were the perfect size.

We took the popsicle stick pieces and actually cut some additional ones. Glue them side by side on the disks. Using the hobby knife score the sticks from around the back of the disks to create the basic wooden wheel.

Measure the thickness and circumference and using a thin cardstock, we used a box from the Madagascar red tea we just finished, wrap it around your wheel and thoroughly glue it on. Using a drill we cut holes in the center of each wheel for the axles which were cut from a long dowel. 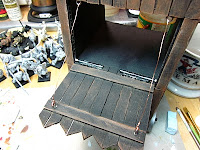 For the door to drop open, we glued on a coffee stirrer and pinned it in using round toothpicks so it would fall open. Screw a couple tiny eyelets onto the inside beam of the door for the “chain” to hold it in position. A couple more on the bottom of the floor above allow it to pull up to a closed position. I scored a great little piece of technology while recycling some old electronics which had two spindles with thin copper wire. We ran the copper wire through the top eyelets and attached them to the door. This allows us to crank the door up and down.

After everything was ready we primed it all black. Successive layers of browns were brushed on starting with burnt umber, then coffee bean and then nutmeg. Highlights were dry brushed with beige along the edges.

Now we load it up with attackers, deliver them safely onto the wall and storm the castle!!
Posted by Rando at 10:20 PM 1 comment:

Everything New is Old Again!

Alright ladies and gentlemen take a look and take a guess. When was the lettering placed on this truck? 1972? 1967? 1962? If you know vehicles, the door handle may give a hint. 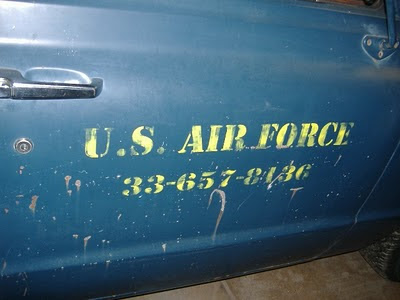 Well it's not 1962 so scratch that one. And you can scratch 1972 too.
So I believe you can guess now at the date.
OK, how about January 2011. A recent creation from the illustrious Hollywood Henderson. He has been perfecting the distressed look for quite a few years now and is fooling even the most die hard auto enthusiasts. His work with the brush is as you can tell unparalleled. We hope to feature a gallery soon on the HendersonWorks site for your viewing pleasure.


Here's another one that will fool you. Well maybe not, we already told you they were newly painted. 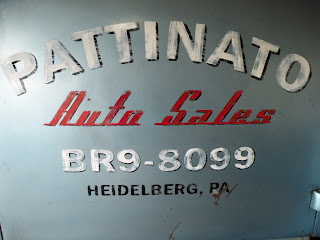 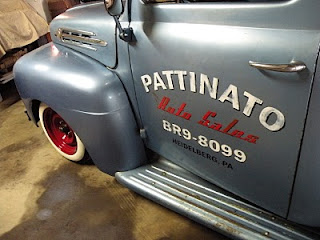 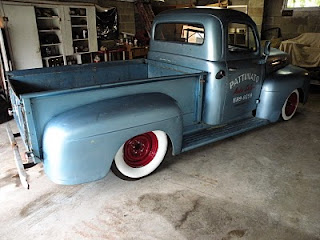 Generals are important figures in any army and very much so in Warhammer. Leading troops into battle and keeping them in the thick of things is important. Without the leadership score of, say a Black Orc Warboss to keep them in line, goblins will do all manner of bickering and tend towards animosity. 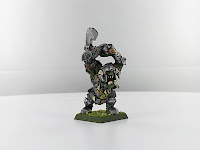 In 2000 Game Workshop produced a Black Orc Boss for Games Day. He's an impressive figure to head up an Orc and Goblin Army. I managed to get one from a friend who attended way back when.
Once I had him painted I was able to try out a camera set up that would rotate the figure and take individual shots that could be put together as a flash video or animated GIF.
Well here's the GIF.

I thought he turned out well.
Another fine Games Workshop figure was Borgio the Besieger produced for the now unofficial Dogs of War army. I created an animated GIF of Borgio as well.

He has a huge mace made from a cannonball that struck him but do to his special "Difficult to Slay" rule and his Armor of Brazen Bronze, it did not. So he made a weapon out of it, the Mace of Might that also gives him a special attack. The helmet he wears is called the "Monstrous Helm" and causes fear in his enemies. He is also an inspiring leader and his leadership extends beyond the normal 12" range on the game table to 18". This is valuable when making those inevitable break tests.
Here's a few more images of Borgio. 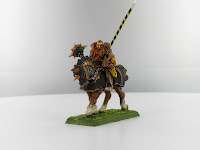 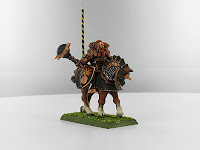 you can see more of Borgio in our Warhammer Gallery at HendersonWorks.
Posted by Rando at 12:14 AM 1 comment:

One of my favorite pastimes is Warhammer, a tabletop fantasy war game. It's a hobby and a game all wrapped into one. My son and I love to create, build and paint. We were looking for a centerpiece to game around and decided a fortified inn would


We started with the basics, foamcore, cardboard and lots of bits. Add a trusty x-acto knife, ruler and imagination and away we go. 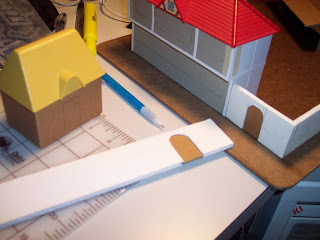 We had a couple plastic roof tops from an old toy laying around in our parts bin so we scaled things to match. The base was cut from the remains of an old dresser that was tossed out. We cut out the doorways and trimmed out the foam to slide in the cardboard doors. The main in is a heavy card stock from some packaging and the wood slats are cut from an empty box of "Madagascar Red" tea. 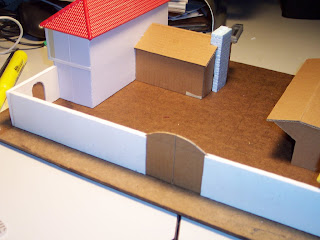 Using cardboard from an old Dell computer keyboard box we fashioned the back of the inn and the stable. Blue insulation board was cut and scored with a pencil to make the stone chimney


The gate door is slid into place in the outer wall 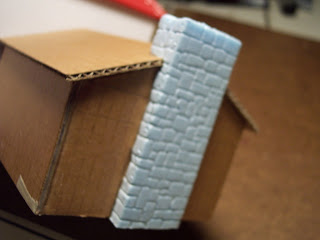 The chimney was just scored with a pencil to make the stones. 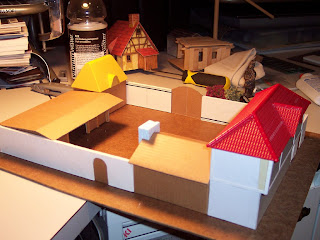 Here it is all together. All that remains is to paint and add all the "flair". 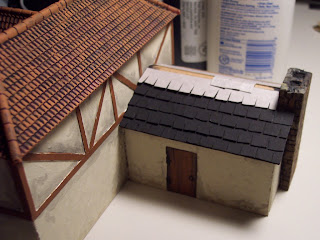 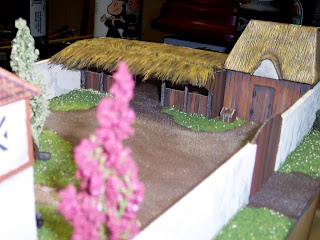 Fur was glued onto the stable roof and the brushed down with a mixture of white glue and water. Once it dried layers of dry-brushing were used to make it appear as straw.
Sand was mixed with glue on the base and also dry-brushed to show the texture. Blended turf and tan ballast, from Woodland Scenics, was mixed and glued to the base for the grassy areas. 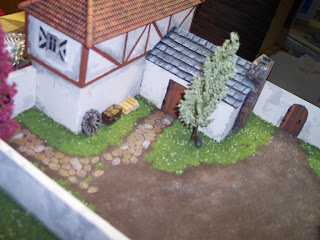 Small pieces of card-stock were cut to represent stones for the pathway. Bits like the wheel, trunk and firewood stack were added. The trees were part of a plastic plant purchased at Michael's for 1.50. I yanked the "flowers" off and have about a dozen small trees. 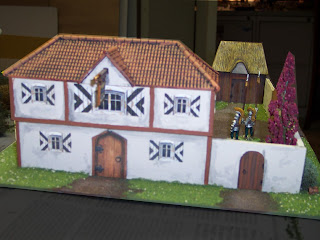 Here's the front of the "Leaping Wolf Inn" 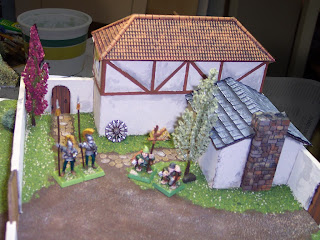 Inside the finished courtyard, you can see the chimney stonework here. I added some Alcatani pikemen and a couple of Lumpin Croops halflings. I believe that's Ned Hamfist holding the standard. 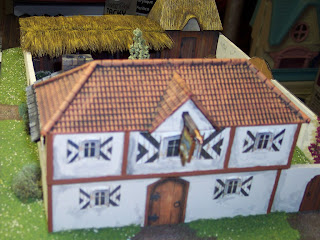 Over view with the stable and servants quarters out back. 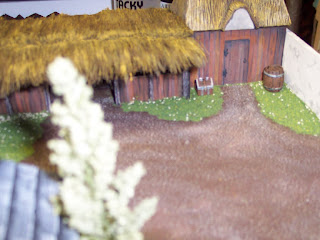 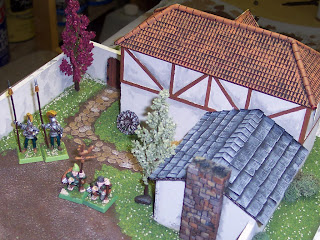 One more with the courtyard and guests of the inn. 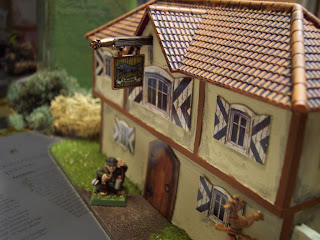 Using a couple spare bits, the inn sign was added and painted. It does say leaping if you squint.


Please let me know what you think of the Leaping Wolf Inn. In a future post I'll relay the battle report that took place around it!
Posted by Rando at 11:23 PM 2 comments:

And so it begins.


More information flooding into the insane amount of data to be consumed by the masses!
We hope to post projects we are working on and some past projects we've done in the, well, past. OK nuff said, enjoy.
Posted by Rando at 7:57 PM No comments: